There are so many amazing things awaiting those who live in Rhode Island, it’s kind of hard to know where to start. Despite being the smallest state in the United States of America, it has so very much going on, so very much to give. Anybody who’s seriously into food will find out right away that folks here take their cuisine seriously, especially if you’re looking for Italian in Providence. Lovers of the arts and academics are delighted with the museums, universities and vibrant creative scene throughout the state. History buffs will have a long parade of sites to visit. And then, of course, there is the shore. Beaches are a big deal here in the Ocean State. People love to lie on the sand and splash in the water. And there’s a tradition here where lovers of the arts, history and the seaside can find collective enjoyment: Rhode Island’s majestic lighthouses.

Dating as far back as pre-Revolutionary times, there’s a vast, deep and rich history when it comes to these iconic sentinels of the shores. While nowadays, modern systems like satellite communications, sonar and thoroughly accurate maps safely guide vessels past the hazards of the shoreline, in bygone days, lighthouses were the guiding angels through fog and darkness lest ships run aground. Visiting them today affords a certain sense of charm and nostalgia. But in their heyday, they were built for very serious utilitarian purposes, literally a matter of life and death for any sailor approaching these lands. In full, 21 of these illuminating structures still stand and operate — again, that’s a lot for such a small state. This means many outings to enjoy over your time living here. Be sure to see them all, but here are a few to get you started.

Let’s start by going all the way back. This one is the granddaddy of all of Rhode Islands’ lighthouses — or at least, the site it’s built upon was. The original lighthouse was made of wood and came into being back in 1749. This was the third lighthouse built in the American Colonies. Just four years later, that structure was lost to a fire. A stone one replaced it, which was considered so important, the British disabled it during the Revolutionary War in 1779, keeping it dark until the end of the conflict several years later. The current granite structure was erected in 1856. While the tower is not open to the public, the site offers spectacular views of Narragansett Bay and the former caretaker’s dwelling is now an excellent museum. There’s free and convenient parking available as well.

Built upon the remains of an old garrison named Fort Hamilton — which was built in 1790 and named after none other than Alexander Hamilton — the Rose Island Lighthouse is a true gem in this list. Accessible by ferry from either Jamestown or Newport, the island is a living bit of history and illuminates a nice chunk of Narragansett Bay by night. It was first constructed in 1870 and served until it fell into disrepair. It was restored in the 1980s and declared a landmark in 1987. If you are so inclined, you can even stay overnight on the island for a fee to the Rose Island Lighthouse Foundation. This experience comes complete with a “lighthouse keeper” option where you could stay for a full week and perform chores to maintain the beautiful structure. It’s an amazing place and you could see it as a casual visitor or really get into becoming a part of its continuing story.

This one is a bit of an oddball on the list. Sticking out of the water like a little sparkplug, the Hog Island Shoal Lighthouse oversees Mount Hope Bay. First installed in 1901, it rests on a concrete foundation in shallow water, essentially serving as its own island. Currently, it is privately owned and there’s no way to visit it. The best way to see it is from a boat. You can take either the Prudence Island or Bristol Ferry to sail right past it for stunning views.

If you’re looking for another overnight adventure, the Castle Hill Inn can accommodate you right up against the Castle Hill Light. Up and running by 1890, this modest structure serves another portion of Narragansett Bay, offering even greater stunning views of the body of water. Several footpaths lead from the Inn to the structure, but it remains closed to the public. 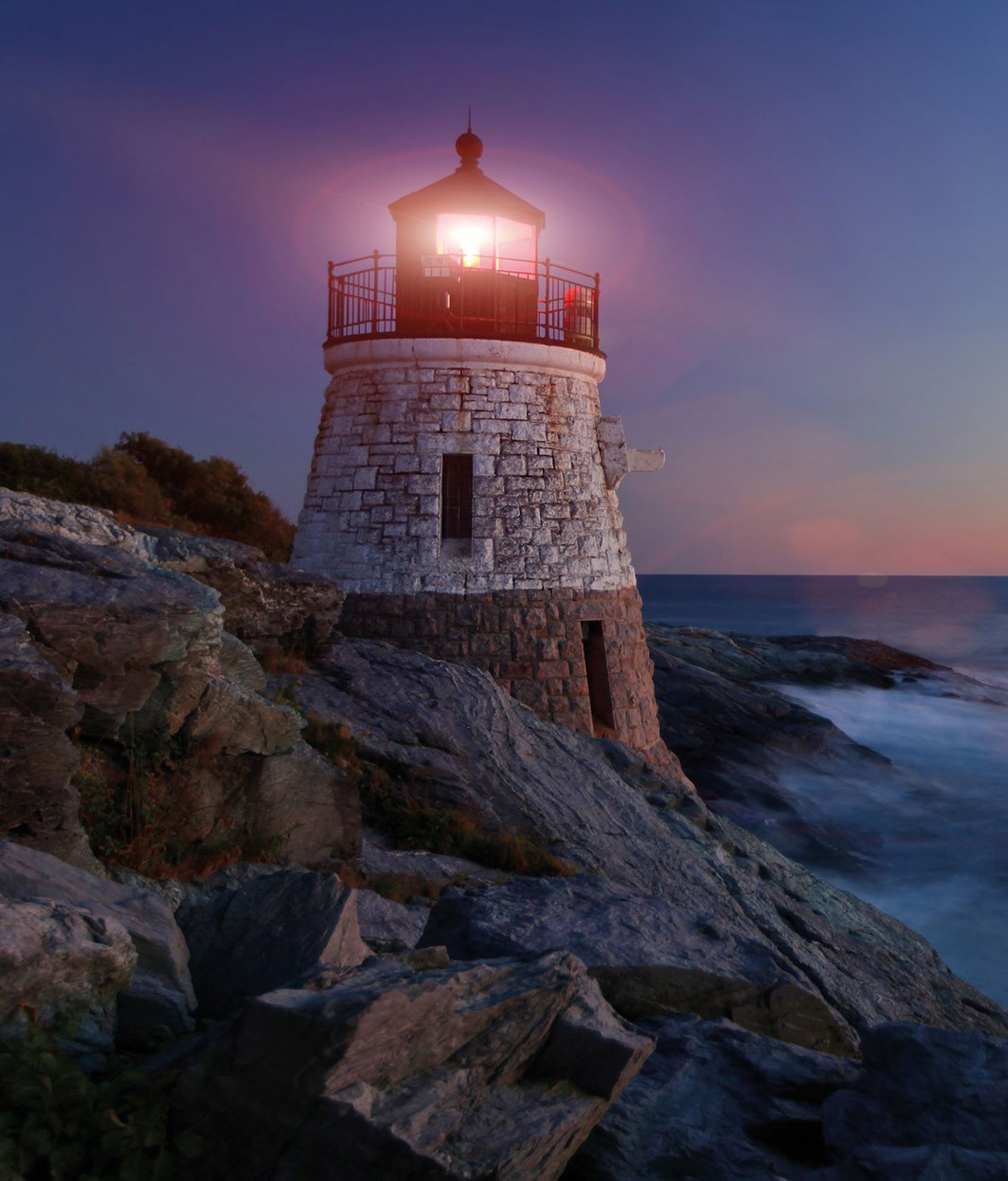