When you think about a fine Rolex watch, there are a few things we are sure may first come to mind. Elegance is likely up near the top of that list. And why not? The brand’s dedication to refinement and grandeur has long made their timepieces a standard-bearer of style in the world of high-end accessories. All eyes in the room are drawn to your wrist when you sport one.

Next up may well be precision. Rolex’s hard-won reputation as always residing on the cutting edge of watchmaking technology is renowned across the world. When somebody sees you wearing one, they know you are the type of person who is serious about the image they project as somebody who takes time seriously — both their own and the time of the people in their circle.

But we might not blame you if fast cars aren’t front of mind when thinking about Rolex. Sure, one might imagine that finish line stopwatches come into play, recording split-second decisions in close races. And you would be correct. Our precision timepieces have long been relied upon for accuracy. While such participation is something the brand is proud of, that only scratches the surface of our involvement in motorsports.

The fact is that Rolex has spent the better part of the last century deeply involved with the favorite pastime of car racing fans. From almost the beginning of professional motorsports, our brand has proudly participated in events, sponsoring drivers and taking a keen interest in elite driving machines and the folks who pilot them.

So what is it exactly that makes for a natural fit between motorsports and Rolex? Some may conclude that all that high-standard craftsmanship affords a sort of undeniable kinship. Others may see the concern with time being a factor. After all, it’s the fastest car that wins the race!

Both of those are true, but there’s also the exclusivity of being a part of something special and sublime that not everybody gets to take part in. Precision gears, stylish elegance, forged in solid metallic splendor and serving the lucky few who get to be in the club, as it were, all humming along with an eye on the minutes and seconds…

It’s all starting to make sense now, isn’t it? Well, it always has for Rolex. And when you take a look at their history in the deep legacy of motorsports, you’ll see even more clearly just what a perfect pairing their timepieces and those marvelously powerful automobiles are, now and across the years.

The Start of the Road

Rolex has been involved with motorsports since the 1930s in one of the most explosive ways possible. Sir Malcolm Campbell was one of the pioneers of automobile speed records. During an era when consumer vehicles were just starting to travel at the now-standard average speed of about 60 miles per hour, Campbell was defying expectations by pushing his cars to the limit.

On September 3, 1935, the British daredevil racer did the unthinkable. Driving in his customized “Bluebird” car — a stunning design that presaged science fiction vehicles to follow in film decades later — Campbell took to Utah’s Bonneville Salt Flats to break a speed record. And that he did, exceeding 300 miles per hour — a first in the sport.

When Sir Malcolm stepped out of Bluebird, having triumphed in his quest, he was wearing a Rolex watch around his wrist. For the brand, this was how it all started. Of course, the man behind the wheel of the greatest precision vehicle of his time had to have the apex of timekeeping technology close at hand. From there, the association between Rolex and motorsport took off.

Campbell broke his speed records around the world, and one of the places he would return to time and again was the Florida city of Daytona. There, he would break five of the nine land speed records he recorded in his lifetime. As a congregating point for motorsports, it was no wonder that NASCAR founder William France Jr. decided to build a professional speedway there.

In 1959, after two years of construction, the Daytona International Speedway opened for business and held its first race. With France’s improved banking design, cars could go faster and audiences could get a better view of the action. And who was their original timepiece partner, and who has been ever since? Why, Rolex, of course.

The inspiration for this premier endurance motorsport event — one that lasts for 24 hours — has endured over the decades, leading to Rolex designing watches to commemorate the event. The first “Rolex Daytona” appeared by 1963 as the iconic Oyster Perpetual Cosmograph. The official name of Rolex Cosmograph Daytona was applied the following year, and by 1956, “Daytona” would appear on the model’s face.

In a nod to Daytona, this design would reflect the precision machines speeding past with some righteous updates. Past models were updated with sporty, ruggedly elegant elements like inverse colors for sub-dials and moving the tachymeter scale from the edge of the dial onto the bezel.

To this day, both brands complement one another in the excellence they project. Since 1992, the Rolex 24 At Daytona race has awarded champions the latest Rolex Daytona as a prize. This goes a long way in explaining how serious watch collectors consider the Daytona releases to be a sort of trophy unto themselves. You know the saying: To the winners go the spoils!

Decades past Sir Malcolm Campbell’s remarkable achievement in Utah, and five years after the release of the Daytona-inspired Oyster Perpetual Cosmograph, Rolex took another step into the greater world of international motorsport. This time, a new partnership would lead to a whole different type of timekeeping: clocking the fastest cars in the world.

Formula One racing was first established in 1950 with the inaugural Grand Prix that has become the standard-bearer of speed racing. With successful European championships occurring in previous decades, there was a true global showcase for the most extreme racers in the world.

By 1968, Formula One was considered one of the most exciting annual sporting events across almost every nation in the world. It was in that year that Rolex formed a close relationship with perhaps the greatest figure in that arena, three-time Formula 1 World Champion Sir Jackie Stewart.

Since that partnership began over 50 years ago, Stewart has been an enthusiastic Rolex Testimonee. Next time you catch a glimpse of him, look to his wrist and you’ll see a Rolex resting there. In tribute to his greatness and his association with the brand, Stewart was designated Grand Marshal at the 50th-anniversary edition of the Rolex 24 At Daytona.

And speaking of partnerships, let’s switch the focus back to Formula One. Rolex went deeper into its association with the racing brand over the years until the inevitable came to pass. In 2013, their Swiss precision watch brand became the official timepiece of the legendary race. It should come as no surprise. After all, catching the exact moment those checkered flags wave over the champs has to be perfect.

There are many endurance races in the world of motorsports. But perhaps the most venerable of them all is the 24 Hours of Le Mans. This granddaddy of all the automotive endurance races traces its origins back all the way to 1923, a full year before Sir Malcolm Campbell would start breaking speed records!

Created at first as an almost casual affair taking place on local village roads, it would in short order, become a proving ground for emerging automotive technology. Soon after its inception, car manufacturers like Bugatti, Bentley and Alfa Romeo would use the race to showcase their automotive ingenuity, dominating the circuit for years and years.

Rolex has always had a keen interest in the 24 Hours of Le Mans, not only as part of its commitment to motorsports but also with the Swiss watchmaker’s natural kinship with this quintessentially French event. And so, by the year 2001, Rolex became the Official Timepiece of the race and has been ever since.

As the 24 Hours of Le Mans approaches its centennial running, Rolex too has become more closely associated with it. In 2010, the watch brand added Denmark’s record nine-time winner of the race, Tom Kristensen, as an official Testimonee. Just as with Jackie Stewart, you can count on Kristensen for two things: excellent driving and one of their precision timepieces resting on his wrist.

In a way, the 24 Hours of Le Mans and Rolex represent each other in some unique ways. Besides sharing a close continental connection, they both got their start in the early 20th century (Rolex was founded in 1905) and both brands stand for durability. It’s a natural fit for racers’ hands, whether they’re gripping the steering wheel or checking the time.

While Rolex is incredibly proud of its many long-standing associations with some of motorsports’ oldest events, there are always more incredible car championships out there. Partnering with the best of this crop continues to present opportunities to showcase the mutual precision craftsmanship of both worlds: automotive and timekeeping.

Keeping in that tradition, Rolex has come to sponsor a number of impactful motorsports happenings around the world, featuring some of the most exciting cars and drivers out there. One such exciting partnership is with the Pebble Beach Concours d’Elegance, a prestigious competition and charitable event that has been held annually in California since 1950.

Here, immaculately restored classic cars are showcased for their beauty and condition, vying for the Best of Show prize. Rolex became the official timepiece for the Concours d’Elegance in 1997. An additional event at this time is the Pebble Beach Tour d’Elegance, which demonstrates these remarkable automobiles in performance. These are vintage vehicles that owners have spent hundreds of thousands of dollars to restore. Car enthusiasts from the world over come to attend.

Another fantastic automotive event that Rolex supports is the Rolex Monterey Motorsports Reunion. In this fan favorite, over 550 historic racecars congregate at the WeatherTech Raceway Laguna Seca in Monterey, California. Like the Pebble Beach Concours, this is an amazing opportunity to see classic cars in action — but this time, they are here for more than the show!

At the Rolex Monterey Motorsports Reunion, these restored racing vehicles strut their stuff in a friendly non-competitive race. While there are no prizes awarded for speed, it’s still a great chance to see these classic vehicles in action. Think of it as a time machine into the world of car racing past. And once again, Rolex’s association with these ahead-of-their-time technologies is something the brand feel right at home with.

After covering all of the associations Rolex and motorsports have enjoyed throughout the ages, it may not be so easy to tell that of the two we are talking about when we think of the words excellence, elegance and performance. That is exactly the idea that it has been all along. From Daytona to Formula One, 24 Hours of Le Mans and beyond, high-tech cars and high-tech watches are a perfect fit for one another.

We can sum this up in the words of Rolex’s favorite automotive Testimonies. Jackie Stewart tells his own Rolex story this way: “I’m lucky enough to have a few Rolex’s, and they’ve all got a special story to tell. It’s a very long relationship, not many sports people have relationships of that period, but then again, that shows the integrity of the company.”

Nine-time Formula One winner Australian Mark Webber sums it up best as a Rolex Testimonee: “In Formula One you work with the best people. It’s cutting edge. They’re always looking for gaps on what can give you an advantage. That is why Rolex is here as well, because Rolex has always been synonymous with being the best.” 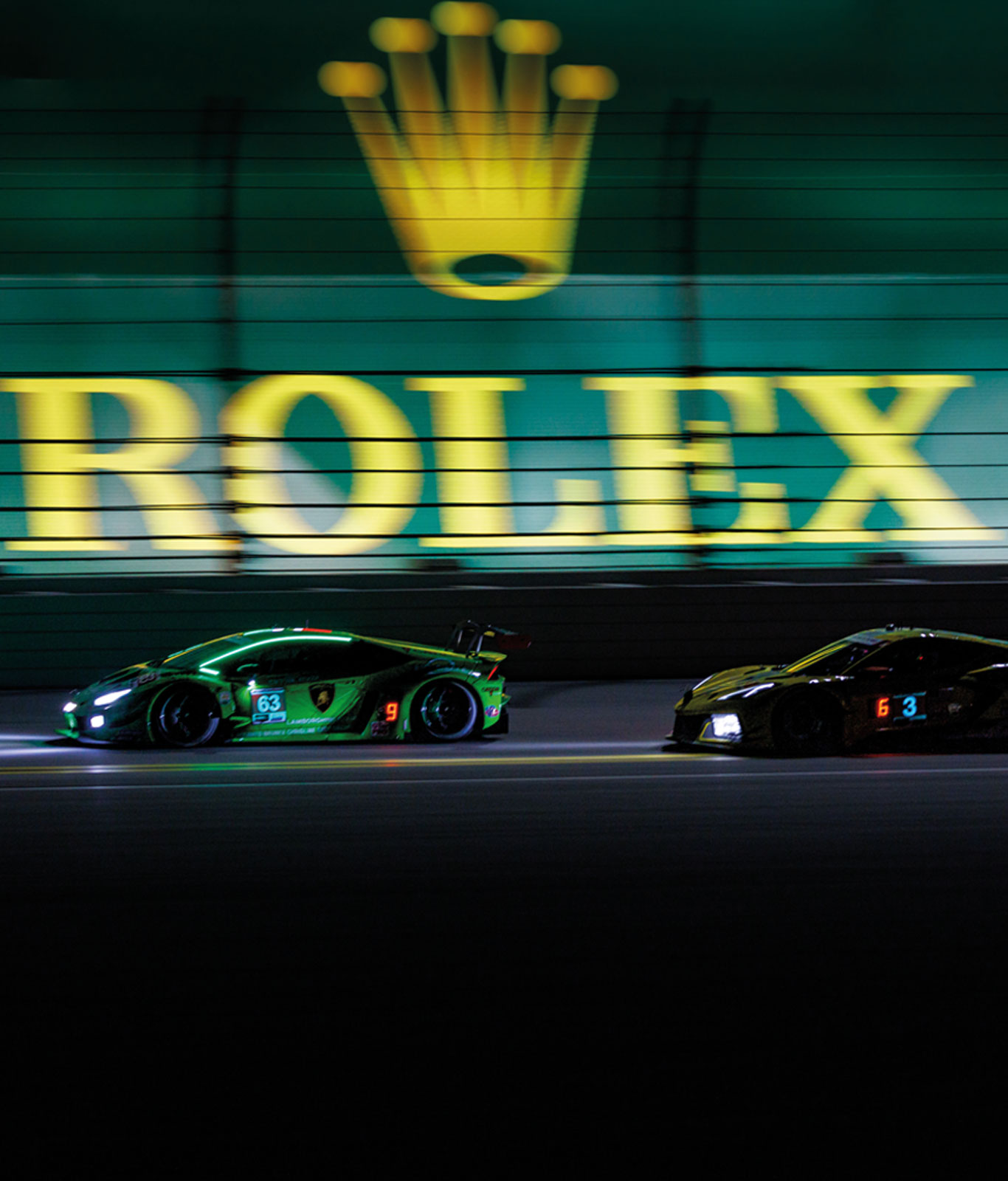